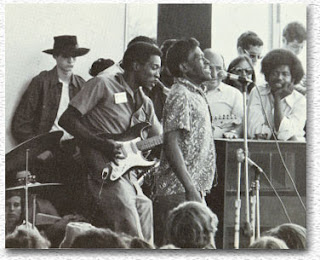 This is a smokin' set I found over at Arizona Jones.  It was recorded at the Newport Folk Festival on July 28, 1968 and the sound is simply fantastic.  A must download.  Grab it here.

Runtime - 39 Minutes 4 Seconds
Posted by Anonymous at 5:40 PM No comments:

There are only 3 or 4 known soundboards from The River Tour as far as I know. I have two of them and while both are good, one is amazing. First up is the great performance/OK sound show from November 5, 1980 in Tempe, Az.

The second is the legendary NYE show from the Nassau Coliseum. Just download it... 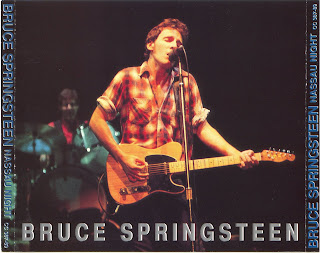 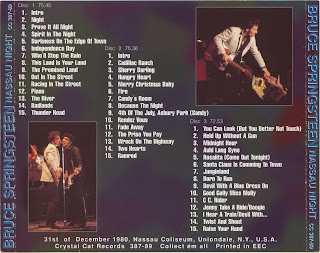 I don't know the source and there are some problems with cut songs and fades on this one but the sound is absolutely fucking amazing. It is the 12-31-80 show and it is two discs so it is incomplete but well worth the download for the sound quality. You can grab it here.

Big time, long time Bruce fan here so I figured I would post up some of  my favorite ROIO's from the Boss.  I'm going to try to hit a bunch of years/tours one at a time and give you all my idea of the cream of the crop.  So here goes nothing with 1975.

And last but not least one of the most amazing boots I have ever heard...
Bruce Springsteen
and the E Street Band
December 31, 1975
Tower Theatre
Philadelphia (Upper Darby), PA

At first blush, this tape might seem a bit ho hum as a complete
soundboard recording of the 12/31/75 show has been in circulation
for years (as are other nights from the same stand). But make no
mistake, you have never heard this before.

The previously circulating soundboard (generally attributed to be
sourced from the late, great Ed Sciaky) was recorded live to
two-track, likely on cassette or perhaps reel, and it sounds a lot
like other '75 board sources. But it turns out a multi-track
recording was also made on 12/31/75, and in early 1976 those
multi-tracks were mixed down to stereo for consideration of a live
album that never happened.

These nine songs are taken directly from the 1976 production reels
of those mixes and offer what is arguably the finest live recording
of the era. Undoubtedly, the official Hammersmith release sounds
great, but it was mixed in 2005, not 1976. If you thought
Springsteen was in your living room on the WGOE session, the entire
E Street Band is there this time. Hope you enjoy these shows.  More to come in the near future.

Posted by Anonymous at 6:45 PM No comments: